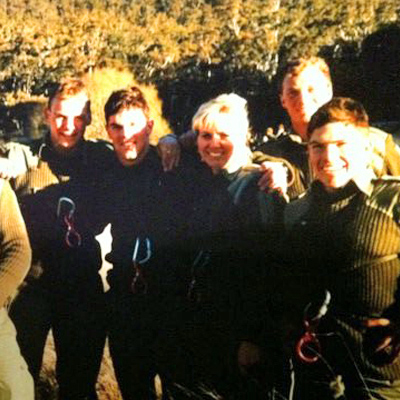 This is a story about how I carried shame and humiliation with me for 28 years, and how that not only affected me in different situations, but held me back from my potential.

It is also a story about possibility. What is possible when we process limiting beliefs that are related to past trauma. We don’t just feel different, we become different. Different feelings = different results.

Are you ready to know stuff about me that I have barely told a soul? What follows is also a lesson in Vulnerability 101.

In 1987, I was 17 years old and in my first year of officer training at the Australian Defence Force Academy. Early in the year we had a major parade. I was not actually meant to go on the parade as I had been mildly sick for a few days, but because one of the lads accidentally stuck a bayonet in his hand the night before, I had to fill his spot, and thus started a chain of events, that I only let go of days ago.

On the parade, the Vice Admiral who was inspecting us, thought he was strolling through a field of daffodils, so took well over an hour to inspect us as we stood to attention (which totally ticked off the Regimental Sergeant Major). The parade ground was grass, covered in dew and steaming up with the morning sun. So it was not too surprising when people started to faint left, right and centre. But the surprising thing was one of them was me.

I couldn’t believe it. I was so embarrassed and angry at myself that straight after the parade I ran for about 3 hours through the mountains around Canberra – barefoot – to punish myself.

Feeling embarrassed and angry are not great emotions to carry around, but they are more like positive emotions when compared to ‘shame’. Little did I know; the ‘shameful’ event was yet to come.

Several weeks after fainting, we had another parade. It was for ANZAC Day (similar to 4th of July). It was less formal, for a shorter duration and I was in fine (physical) health. But I wasn’t in great mental health as I started to feed my fear of ‘what if I faint again?’

It will come as no surprise to you, that I did feint again. This time however it was more a stumble and then going down onto one knee to recover. So after the parade, I used the excuse that I didn’t sleep enough and had too much to drink the night before, but they weren’t the truth. The truth was I had no physical excuses to blame. This was all my doing. So I felt deep shame, humiliation and weakness. A much more insipid emotion than embarrassment, because I now thought there was something wrong with me.

I started to form a belief, below the surface, that I was powerless.

So for the next 14 years in the military, every time before I went on parade, and every time I was on parade I felt FEAR. I felt weak. I felt powerless. I even told myself if I ever fainted again, I hoped I would land on my bayonet. Plus I would resign from the Army if it happened again.

But that wasn’t the worst of it. It was the BELIEF of ‘I am powerless’ that I carried with me for 28 years that was the true thorn in my side.

The power of belief

But I felt like a phoney. I was actually ‘scared’ as I stood out the front of them. Hardly the traits of a great leader, I thought. And this just further reinforced the belief I had about being powerless.

I bought into the story: ‘I am powerless”.

Now to external observers, this was probably not apparent. I succeeded in the military. I succeeded as a consultant to Olympic Games. And I seem to be doing alright for myself as a coach, author and teacher (because my passion over-rides my fears). But all this time there has been something that I have been challenged by.

I have felt powerless in front of individuals that I perceive to be at a higher level (professionally) than me. Whether that was the General in the military, the executive in the Olympics world, or the best selling author in the wellness industry. I have felt intimidated in many of these situations. I could work through them, or around them, by sheer will, which I did; but it didn’t come easily. I was doing more forcing, and less letting the POWER flow.

The ceiling created by our beliefs

So I have this belief – I am powerless (in certain situations) – and it shows up in a way that makes me feel intimidated to reach out to people that I believe are above me in some way. Plus I realised I could succeed at a high level when I was working for others (e.g. military and consulting company), but I choked up a bit when it came to me being the ‘leader’ out the front of my own business.

I realise my limiting belief has impacted my ability to become a best-selling author because I thought these ‘best-selling’ authors were better than me, on a very subconscious level. When the reality is my books are as good, and in many cases better, than the apparent ‘best-sellers’. Sorry. It’s the truth.

My limiting beliefs had created a ceiling on my potential.

So what would happen if that ceiling (and limiting belief) was removed?

I will remember this day forever. This is the day I did the work on myself to finally identify, face and remove this 28 year old belief about powerlessness. I used a 4-Step process that is outlined in a very outstanding book called ‘Code to Joy‘ by Dr’s Pratt, Lambrou, and Mann.

Like I said at the start of the newsletter, the feeling I had after I had gone through this process to remove and replace my limiting belief was: The world bent itself around me.

After the session I honestly felt that I am not intimidated by anyone. The idea or feeling of hesitation or fear about speaking to whoever I wanted to was just gone. I could jump on the phone to the Queen, Richard Branson, Tony Robbins, Deepak Choppra, or anyone else leading the wellness industry and speak to them 1-on-1 one, as an equal, and not be freaked out by it. I could see any ‘celebrity’ in person and say hi, without putting them on a pedestal. I could raech out and be totally cool with rejection and not reading anything into it.

I could also own my expertise and proficiency within the business I am in. I sort of knew it, but now I REALLY KNOW it. Plus I can truly and authentically own the belief, “I am equal to the best”.

The shift was profound. It was a quantum leap and it happened in less than an hour. Less than an hour to unpack something that has clouded my psyche for 28 years! That is why I had to share.

The lessons for you

Here are the lessons I really want you to take away:

Our limiting beliefs limit us.
Our limiting beliefs actually drain energy (practically).
Not dealing with stuff does not make it go away.
If you have pain or a challenge in any part of your life I am 99% certain you have a limiting belief (or story) that is causing the pain. Change the belief and you change your life.
With the right method and support, you can change your entire life in a very short space of time.
Our brains, minds and personality are not fixed, but malleable.

We are all capable of so much more. So make sure it is not a limiting belief that is holding you back from the potential you have within.

If you want to listen to the longer version (about 25 mins) then click here.
Want or need to speak to me about anything? You know where to find me. 😉

As always, please ask any questions you have. Or tell me how much you love these tips (or hate them – but do it nicely) ;-). Also do me and others a huge favour and pass them on. Knowledge used in the right way is definitely a way to access our incredible power. All the very best and take care.

Mate – I think at times we all felt ‘fear’ and personal doubt in some form or another during out time in the military. That said, you’re the first person I’ve heard actually acknowledge it.

Thanks for sharing and letting me know I wasn’t the only one.

PS – there are some babes in the photo…….